The joys of cats 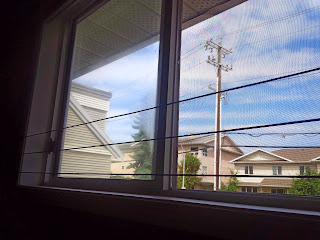 ‎Our cats are an absolute joy. They're an integral part of the family and they know it, which makes for some interesting situations. Unfortunately, they're still cats, which means they have cat-like tendencies such as trying to get out when in heat (our female is still not fixed, though that is seriously on the list) and going absolutely nuts when they see a bug. Tie those with a house where we keep the windows open during the summer for air circulation, and you have a recipe for falling screens, broken frames and "hey, is this a wide open area to look into?" type curiosity. While we've tried restricting the window to just too small to allow cats through, the resulting loss of air circulation in 30 degree weather wasn't enjoyed by anyone. So in desperation, I set up a cord barrier to the window sill. Using paracord (a nice bright blue colour) I set up three somewhat taunt barriers in the window frame, secured by eyed grommets in the frame. The running theory is that the line is too high for the cats to jump over, but not taunt enough for them to use it as purchase to get onto the sill.
Here's hoping.
P.
Sent from my supremely cool BlackBerry  Z10 which totally doesn't look like an Iphone....
Posted by the Pboud at 9:28 AM