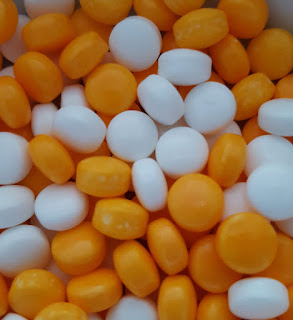 For the past few months, my Galaxy S4 was glitching out on me.  The first major failure was when the default camera software started saving only corrupted files.  Only a section of image would save and the rest would be grey at first.  Eventually, none worked.

I switched to a purchased software and that worked for a while.  It was the video that went on that, first.  Lost what should have been some amazing footage.

Then there where things like overheating.  Audio going weird, both in music and in the middle of calls.  Etc.

Of course, my contract wasn't up yet.

Eventually I had no choice. I had to upgrade.

Photo quality was one of the deciding factors, since I really don't use my phone *as* a phone all that often.

I almost went with the Galaxy S6 Edge, which has had good reviews, but instead went with just the S6.

This is the second photo I have taken with it.  I am in low light, plus the phone itself was about an inch away from the top of the bowl.  I would have had trouble with this with a regular camera, and my previous phone would have had a lot of noise due to the low light.

This is straight auto and default settings.

I think it turned out pretty darn good!

I don't think I'll be using our regular cameras much at all, anymore!

What has your experience been with phone cameras?